Insta360 is the world leader in 360-degree cameras.

Insta360 make cameras that allow you to share everything, everywhere. From the Insta360 Air to the eight-lens cinematic Titan VR camera, they’ve got every angle covered!

The Insta360 Air allows you to share 360 highlights of your life with friends on social media or broadcast them in real time with live-streaming mode. Just plug in and your Air is a 360 webcam. Hold infinity in the palm of your hand. Or your pocket when you’re on the move.

Low-profile, high-impact. Ready to carry and capture life in 360°. The Nano range allow you to turn your iPhone into a VR camera, tell your story in 360°. Share on various social platforms and provide immersive experiences to your friends and family. Can be used as an independent camera, or connect it with your iPhone for advanced shooting modes. Allows for one-touch sharing & live-streaming. 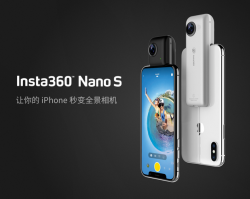 The Nano S lets you capture 4K 360° Video + 20 MP 360° Photos. MultiView lets you record in every direction, and arrange the best of what you see in one frame. Plus the all-new 360° video chat lets you share an immersive, real-time view of your world!

The ONE X is INSTA360’s latest generation of action cameras: it’s more fun to enjoy snorkeling, swimming, surfing, cycling, skateboarding, climbing, hiking, etc. Capture your movement or what you see without worrying about the quality of images or videos. Insta360 OneX shoots stunning 5.7K video and 18MP photos that are as awesome as the moments themselves.

The Insta360 Tital an eight-lens cinematic VR camera that captures 360 photos and video at up to 11K resolution. Titan is the first unibody VR camera to shoot at 11K mono and 10K 3D. VR has never looked this real. Titan sets a new benchmark with 11K resolution and ample 3.3-micron pixels. That’s seven times higher than 4K. It produces superb low-light performance that puts Titan in a class of its own. Capture crisp, vibrant, noise-free VR, from dusk till dawn.

To view the full range visit: