Follow the extraordinary journey to the South Pole with DNP Photo Imaging Europe.

50 days of adventure in Antarctica

As expected, despite the apparent monotony of an ice desert, Antarctica has reserved Matthieu some surprising difficulties that may have jeopardized his expedition.

Struggling against the effects of global warming

With almost zero visibility due to the whiteout and the 55 km/h headwind that considerably slowed his progression at the beginning of the expedition, pulling his 115kg sled in 30cm thick powder snow has been a huge effort. This unusual snow condition was due to abnormal higher temperature and snowfalls, which are very rare in Antarctica… Consequences of global warming? 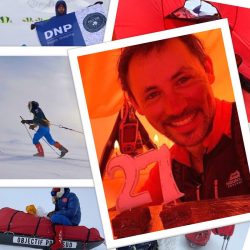 For his 27th birthday (4 December), Christmas and New Year, Matthieu kept up his rigorous routine, pulling his sled, alone in the middle of Antarctica, with his satellite phone and his GPS as his sole companions.

A race against time…

Despite constant efforts, at the halfway point, Matthieu was far behind schedule. If he were not able to catch up, he would not have enough food to reach the South Pole. Therefore, he had no choice but to accelerating the pace, sleeping less and reducing his daily food consumption to have the possibility to extend his trip, if necessary.

In addition to the distance traveled, Matthieu also ascended more than 2 500 meters to reach the South Pole plateau a few days ago. Thanks to his huge efforts and better snow conditions Matthieu has made up the lost time.

The DNP flag will soon flutter in the South Pole wind… 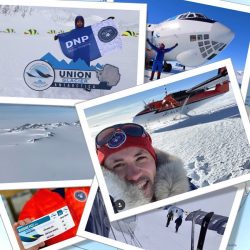 After almost 50 days, Matthieu is very close to his goal, but he is also exhausted and has a painful knee. Also the effects of the high altitude are amplified by the proximity to the pole (the altitude felt is 4,500 meters! when he is only at 2,500m). Only his mental strength allows him to continue despite the pain and fatigue.

Once at the South Pole, Matthieu will find the DS620 printer that was shipped directly by plane. In this most hostile environment, Matthieu will test the printer with the most beautiful photos of his journey and will bring back these unique prints to Europe.

As the expedition approached the end, your support to Matthieu is more important than ever!

Follow the arrival of Matthieu at the South Pole in the following days on Facebook @dnpphotoimaging and don’t hesitate to send your encouragement!